Working with a consistent dataset is important when in a team environment, but can cause issues when the data size grows. Sharing a data image with Spawn allows all members of your team to be able to quickly create data containers, all getting the same starting point but being isolated from each others changes. You can also share data images created using the graduate command, allowing you to share changes you've made to your data container such as recreating a bug.

Spawn is currently in open beta. Complete the installation instructions to get access.

This is part of a series of short guides for getting up and running quickly with Spawn. 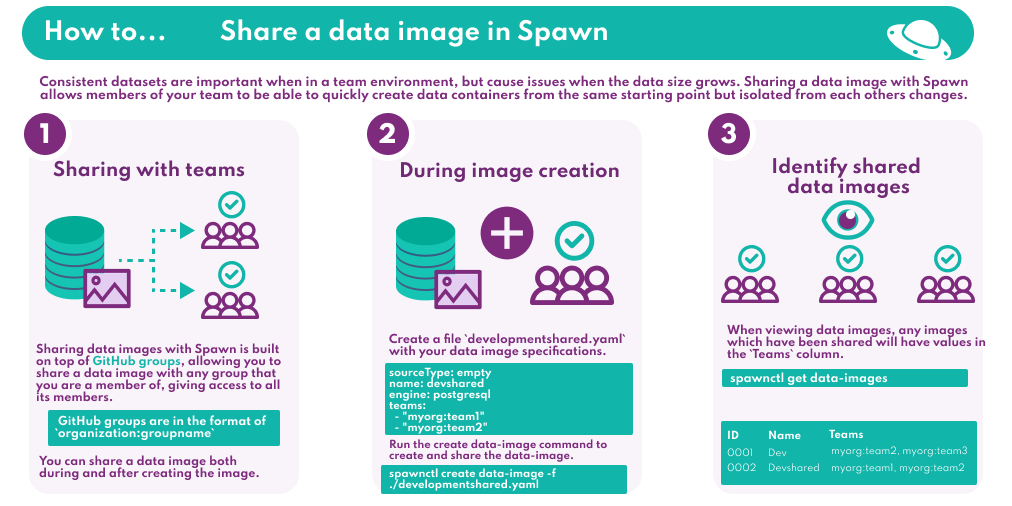 Sharing data images with Spawn is built on top of GitHub groups, allowing you to share a data image with any group that you are a member of, giving access to all its members.

GitHub groups are in the format of organization:groupname

You can share a data image both during and after creating the image, we'll cover both below.

When creating an image, we can share it with teams at the same time by adding them to the image definition file.

When viewing data images, any images which have been shared will have values in the Teams column.

Now you have a data image available and shared with team members, you can all create data containers and have access to the same data, in your own isolated environments.